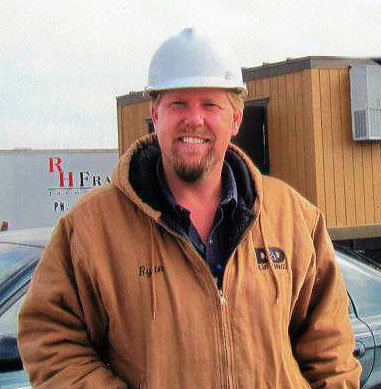 My name is Ryan Ray Harrod and I am the third generation of the Harrod Family construction business. My Grandfather, Everett Harrod started the family business in Southern California in the 1940’s. In the late 1950’s, my Grandfather and his two sons, my father, Ray Harrod Sr., and uncle Glenn Harrod came to the Salinas Valley and set up Harrod & Son’s Construction. My father had three sons, Ray Harrod Jr., Mike Harrod, and myself Ryan Harrod. My father built thousands of homes, apartments and commercial buildings over the years. My two brothers, Mike and Ray are partners and own Harrod Development Incorporated and are developing several projects in the Salinas Valley and also the Paso Robles area.

I started in the family business working summers in fifth grade as the clean-up assistant. I picked up construction debris until the summer of seventh grade when I began to pack lumber for the framers. By the 9th grade, I got my first set of nail bags and skill saw and my brothers’ began to teach me carpentry work. At the beginning of my junior year of high school, my parents employed a personal tutor to work with me to get extra credit in order to graduate early. I did this in order to start working full time with my brothers at the jobsite. By my senior year in high school, I had earned so much extra credit that I only had to attend one class in the morning, which enabled me to work full time on the jobsite.

By the time I had graduated from High School, my brothers could hand me a set of plans and I was able to layout foundations, set forms, frame houses, cut roofs, install exterior siding, finish work and detail the homes for buyer walk throughs. At twenty years of age I was one of the lead carpenters on the jobsite. At twenty-one I was promoted to our largest subdivision, The Harden Ranch as Assistant Project Superintendent.

Two years later I was Project Manager of the Harden Ranch development, a subdivision of over 1,000 homes and Personal Assistant to Harrod Brothers General Manager, Brad Smith. I supervised this project, which entailed generating the project schedule and supervision of all the construction from permit process to buyer walk through for eight hundred homes. At the point when there were approximately two hundred homes left to build we had gone through three framing contractors and were not able to find one that met our needs. After the problems that we had incurred with the framing subcontractors, Brad Smith suggested that I should frame the remaining two hundred homes myself. Harrod Brothers decided that if I were interested, they would support me in my quest to start my own business and frame the remaining homes for them. Brad noted that through my employment with Harrod Brothers, I had trained two very capable Superintendents that would be able to supervise the completion of the Harden Ranch Project.

I immediately jumped on the opportunity to get my contractor’s license and open my own business. In October 2002, I opened Harrods Custom Homes a sole proprietorship. I incorporated the business several months later and opened RH Framing Incorporated. I completed the framing of the last two hundred homes of the Harden Ranch project.

My father retired, and Brad Smith went on and opened Valley Community Homes on his own. I assisted Brad through the approval process of his first subdivision, Monte Bella Estates. I spoke at City Council meetings and met with City Officials in order to assist with getting Monte Bella Estates approved. This project was an 854 home track subdivision in East Salinas.  Since that time I have gone on and opened a second corporation, Harrod Construction Contracting Corporation (HCCC).  Between RH Framing Incorporated and HCCC I have framed numerous extremely large subdivisions from Hollister all the way down to Paso Robles.  I have completed projects from small remodels to very large new custom homes in Carmel, Monterey, Pebble Beach Golf Course, Los Gatos, Carmel Valley Preserve, Paso Robles and so on.  I have completed numerous commercial projects such as Bernardus Lodge in Carmel Valley, Pasadera Country Club, Alta Surgery Center, Carmel Valley Ranch Lodge, Robert Louis Stevenson School in Pebble Beach (Phase I, II and III), several large prevailing wage projects, Rancho Cielo Vocational Center and many others.  I have built numerous large apartment and townhome projects, assisted living projects, several farm worker apartment housing projects, along with duplex and triplex projects.  In 2010, I began construction on a very large project in Salinas, the GMC & Goldstar Auto Sales buildings.  This project was completed with Harrod Construction Contracting Corporation. As time has gone by, I have expanded the trades that RH & HCCC specialize in from framing and masonry to finish carpentry, siding, and window installation just to name a few.

In 2016 my family began the process with the City of Salinas to develop a large piece of land on Abbott Street.  We received the approval in 2019, and Harrod Construction Contracting Corporation began construction on four large mixed use buildings.  The project consists of commercial tenant spaces on the 1st floor of each building and residential apartments on the 2nd and 3rd floors of each building.  HCCC is the general contractor for this project and as the general contractor we are self-performing many trades such as rough framing, masonry, finish carpentry, siding, retaining walls, general labor, and project management/supervision.  The project is scheduled to be complete in the summer of 2022.

As a third generation builder, I strive to ensure the quality construction my family has provided to the community for over 60 years. The Harrod name is the only family construction business that has real estate agents listing “Harrod Built” on our homes they sell to reassure the buyer they are buying the highest quality homes.

My wife, Megan Harrod and I have been a team since I started RH Framing Incorporated and then opened Harrod Construction Contracting Corporation.  Megan has handled all of the accounting and office management for both businesses – it truly is a family run business.  My brothers both have sons whom all have opened their own construction companies over the years. I myself have two sons, my oldest Travis is now 16.  Travis started working on the jobsite last summer to continue learning and improving the carpentry skills I have taught him over the years and has begun to learn welding as well.  My son Seth, who is now 14 has learned may carpentry skills over the years as well and also is learning to weld.  My hope is that Travis Ryan Harrod and Seth Ryan Harrod will be able to continue the family business of fine construction.